Matt dissects an absolute chaotic race on the streets of New York city... 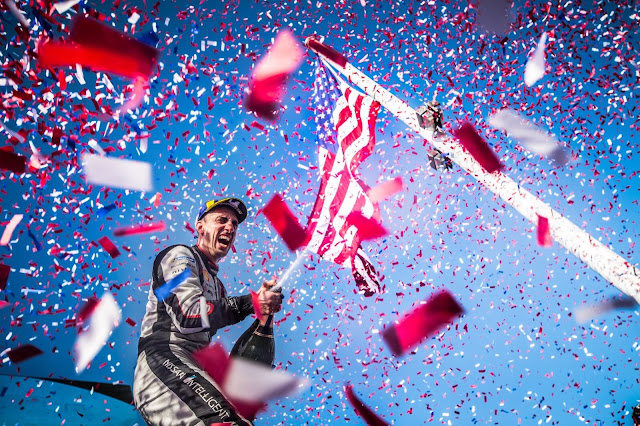 Good start by Buemi and great start by Lynn. Lots of bumping through the first 3 turns. Sims was first to make the big move on the 2nd lap, a punishing maneuver that wound up dropping Wehrlein down to P5. No sooner had that taken place then some kind of utter catastrophe had put Lotterer into the wall heading into T5, with carnage all round. Vergne, too was caught up in the mess and after extricating himself was into the pits with damage to the front of the car, bodywork waving wildly in the wind. Lotterer was in worse shape but he still managed to drag the smoking carcass of his car around the track and to the pits, bodywork dragging heavily on the tyres and billowing out their protest.

Di Grassi was in P14 and now looking to advance and take advantage of the championship leader's misfortunes. A replay of the previous lap's catastrophe showed that heading into T5 Bird tagged Lopez who looked to be trying to get round Gunther and then it was an accordion behind, with Vergne tagging the car ahead of him and then getting whacked from Lotterer behind, who wound up being just about turned around by Di Grassi when Lucas tapped him from behind.

Whilst that madness unfolded, Alex Lynn was busy consolidating his hold on 2nd, but with Buemi running a conservative race, likely to keep a careful watch on battery temps and energy, the interval between the top 4 was just under a second each.

36 minutes to go and Lynn was first to tag the attack mode, forcing Buemi to respond the following lap. Still, Lynn was loitering around half a second off the lead and still setting purple sectors as lapped traffic hove into view. Further back, Di Grassi had worked his way up to P11 and was now chasing Frijns for P10, a position he handily took into T10 with 31 minutes left in the race.

Bit of bump drafting into T10 as Lynn urged Buemi forward at one of the best overtaking spots on the circuit. 10 second penalty for Bird was announced, causing a collision, and then it was Lynn, making his move through the first complex of turns, before Buemi ably snatched the position back on the long straight to T6. Massa and Paffett had a bit of a tangle into T10 and it was Massa coming off better and Paffett dropping back to P15.

Frijns meanwhile was suffering and the decision was made to retire him. 22 minutes to go and Lynn was all over the diffuser of Buemi and as they rounded T5 Sims, just behind picked up attack mode. As Lynn defended from Sims, suddenly he pulled over, a momentary loss of power, but then reaccelerated. It was but a brief remission as seconds later, Lynn pulled over, day done.

Sims used the remainder of his attack mode to close down the gap to Buemi and Sam Bird, still with a 10 second penalty, had moved himself up to P4, with a nifty pass on Wehrlein. Behind, Da Costa and Evans had also sensed a weakness with the Mahindra and had followed suit, bringing Wehrlein down to P7, with Gunther, having a good drive for Dragon behind.

Safety Car at 19 minutes, called to remove the stricken Jaguar with a restart at 16 minutes. Buemi had a torrid restart with Sims all over him as he failed to create any gap whatsoever. As Sims hung outside Buemi, Abt, on a run tried to come alongside and as the rolled into the turn the by now iconic sound of crunching diffuser was clearly audible. But the next duel was between Evans and Abt with a savage move into T10 crunching the Audi driver and down the field he went, to P9 before he recovered his footing.

Another savage move, farther back, was Turvey taking on Paffet and just basically driving into the side of him in T10, not the most artful of things but effective, even if it was only for P16. Evans was next up to make a fantastic move up into P2 past Sims, avenging his lost comrade.

A big smash with Mortara trying to send one up the inside on T10 promoted Vergne to P12 and with 7 minutes to go it was another place. Di Grassi under investigation as Buemi continued to weave his defensive spell at the front, with Evans, now past Sims, lingering about a second back. The next lap he was another second off and Da Costa was all over him, with likely battery or energy issues making his life very difficult. Vergne nabbed his second attack mode and was up to P9.

2 minutes to go and it was Evans saying the balance had gone and as he defended from Sims, he set up Di Grassi to have a go at Bird, up to P5, not a bad haul from a P14 start. Last lap and then it was Vergne, stealin all the focus as he and Massa, who had passed him for P9, had a terminal disagreement into T1 and created a bottlenck, costing him 3 points as Di Grassi finished P5 and Buemi, who was on 76 points at the start of the race, was now holding 104 points to Vergne's 130.

In replay, it was Massa on the outside around T2 as Vergne made a move, shutting the door into T3 and putting Vergne into the wall and spinning himself. D'ambrosio, behind the both of them, drove directly over them moster truck style to carry on with his race.

With Evans P2 the championship was down to 108 DIG and 105 EVA while on the team side, just 24 points separated Techeetah from Audi for the team championship. And a huge win for Buemi, the first for Nissan this season and coming at the best of times for them in their first season as partners for the e.Dams team. But at the top, nothing was going to change and it was Buemi, Evans and Da Costa, in that order, taking it to the podium before they did it all again tomorrow.