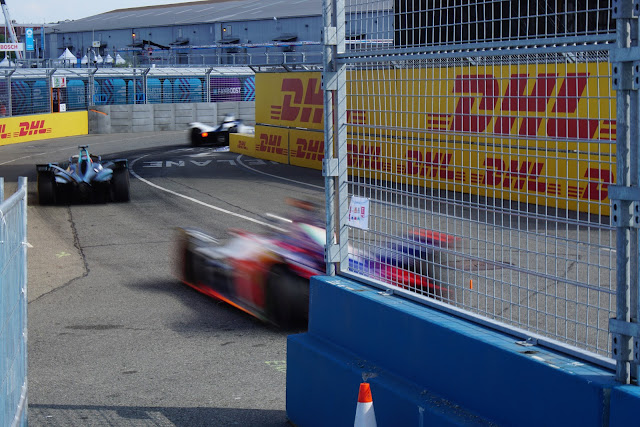 da Costa led the way followed by Vergne, di Grassi, Buemi and Evans last. After the outlaps it was Buemi, once again fastest, but for the moment just in the least favorite of qualifying groups according to the drivers. Evans was next closest, taking advantage of his last place position to finish within 0.06 seconds of Sebastian. di Grassi outpointed Vergne by a mere 0.023 seconds but he was mre than a quarter second back of Evans so another midfield start was looking likely for the pair and da Costa, apparently less concerned about start position after yesterdays race, finished at the bottom thanks to his role as cleaning the track. Interestingly, on the way in, Vergne kept swerving well offline, kicking up huge clouds of dust, though whether that was to annoy di Grassi, spoil the line for Group 2 or just to test the surface before the race was impossible to say...

Lotterer and Abt were out first to do a warm up lap, but by time they got round to the business end of their circuit they were both on the edge of making the start line before the checquers fell. Lotterer nailed the line by just 3 seconds and it was Bird, then Frijns then Lotterer all taking the fastest first sector. Neatly arranged first Bird then Frijns then finally Abt took P1 and it was a disaster for Lotterer, who finished dead last, losing huge chunks of time in the second and third sector, a 1:10:699 vs a 1:09:902 for Abt at the top of the sheets after the completion of the first two groups.

Rowland was the leader in group three, tracked closely by Sims who looked as if he wanted to get past and there was almost a coming together down the starting straight as Rowland swung back toward the wall as Sims was trying to go round the outside....

Mortara was first up on his hotlap and the car was decidedly sketchy under braking, the rear looking to go first left, then right at the first hard braking zone. Behind, Sims was going quicker than anyone with Vandoorne there or thereabouts. Massa, off to a wretched start was well off the pace even before a mistake into T6 ended his efforts, leaving him parked sideways in the runoff area.

Sims completed his run and went to the top and Vandoorne, confirming his form in the first sector, finished P2. This dropped both di Grassi and Evans out of superpole and left Buemi sitting on the bubble, with the very speedy Alex Lynn coming up in the last group.

Massive controversy as Gary Paffett, on a fast lap clearly capable of ousting Buemi from superpole, was balked by a loitering Dillman, clearly unaware that the fast moving HWA was heading straight toward his rear wheels. Easily costing him half a second just from having to slow to avoid a collision that sealed the fate for the Buemi, confirming him in superpole as Lynn, the other driver considered capable of mounting a superpole drive, had a mistake in his first sector that put him out of contention. Even at that, Paffett was quickest of the session, going P9 overall, with Lopez behind then Dillman, Gunther and Lynn, already tagged with a 20 spot penalty for his change of motor after yesterday's failure....

Buemi was first off the line, good first sector, as he without a prep lap times tend toward the slower. Neat around the hairpin, carrying good momentum through T11 and across the line with a 1:09:729 a high bar to clear for the remaining competitors.

Bird was next to go, slightly up after the first sector and then a huge lockup into T9 and again into T10, losing a quarter second and even with a fastest final sector he was unable to undo the damage, going P2 a tenth slower than Beumi as his teammate was getting ready to take his turn.

A bit slower through the first sector, Frijns was much neater through T9, still trailing by a tenth. A clean exit from T11 saw him able to carry momentum to the end, despite swiping the wall on the way into T13 and he was just able to clear Buemi, by 0.017 seconds, ending the championship possibilities for the Nissan e.Dams driver as without the points for pole position he was mathematically eliminated from winning.

Abt was next up, and having lost a quarter second through the first two sectors, he lost another tenth and half through the final sector, slotting P4 behind Bird. On replay, you could see he clouted a kerb that unsettled the rear and that cost him dearly.

Vandoorne, who was quite rapid in his group qualifying, continued the trend going up by 0.001 seconds. It began to slip away in the second sector, going down by a quarter second and he was third fastest in the final sector, leaving him P4 with just Sims to go.

Sims was clearly in a big mood, practically drifting it round T14 as he crossed the line and banged it down over the start line to begin his hot lap. Up a tenth through sector 1 he was down to half a tenth margin with the third sector looming large. The BMW Andretti driver gave it everything he had, and as he crossed the line he was a decisive, if not very large, 0.095 seconds up on Frijns taking pole position and moving Buemi down to P3, not as much of a disadvantage given how dirty the offline grid slots were.....

Further down, di Grassi and Vergne, locked in their own private duel, would be starting side by side, P11 and P12 respectively and Abt's performance also put a great deal of pressure on Techeetah, with Lotterer starting P20 versus Abt in P6 and just 24 points in between them...