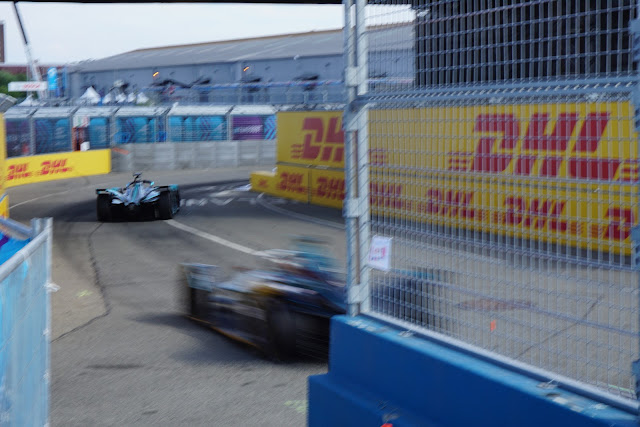 The duel: di Grassi, Vergne, P11 and P12 in a fight for the championship while Techeetah led Audi by 24 points with Lotterer starting P20 and Abt P6. Could be tight, especially if there is the same kind of carnage as Round 12 saw.

Buemi nabbed P2 off the line thanks to starting on the clean side of the grid with Vandoorne into P5. Lopez spun into T6 and getting back in tagged Lotterer who was trying to get by. Great start by Lotterer who was up to P14 before the damage from Lopez, then dropped to P16 after. Vergne was all over the back of di Grassi so close that and into the hairpin he was forced to swing wide to avoid tagging the back of the Audi.

The following lap both Vandoorne and Frijns chose to engage attack mode and the gaps at the front were well under a second. Frijns had a serious go Buemi but Sebastian was able to successfully defend as Lotterer was into the pits and then a Safety Car was called for Lopez who had stopped at T7.

On replay Lopez was first tipped by Lotterer and then Lopez drove into Lotterer trying to regain the track. Broken left rear suspension for Lopez, and lotterer was out, but a lap down. It was clear the drivers had learned nothing from the previous days shenanigans.

Still under the Safety Car, Lynn, who had served his drive through penalty was back out and attached to the back of the pack, a nice break for one who was so cruelly served by the race gods. Restart on lap 5 and Sims was really off before Buemi could react. Sims nabbed attack mode on his way through T5 and was nearly a full second up on Buemi.

Vandoorne, meanwhile, had managed to snatch a spot from Sam Bird and was up to P4 and he, too had grabbed a handful of attack mode. bird responded the following lap be going for his second attack mode, which was needed as he was now under serious threat from Oliver Rowland behind.

Frijns then sold Buemi a dummy into T1 and slid through huge clouds of dust offline at the start of lap 8, somehow getting his Envision Virgin stopped and led the way through the first complex, P2 secured and off in search of Sims in the lead.

Bird, feeling frisky as well, chucked one up the inside of Vandoorne and relieved the HWA driver of P5, setting his sights on Buemi ahead as the team had clearly got something figured out overnight.

The championship battle, by contrast, consisted primarily of Vergne and di Grassi staying quite chilly through the opening stages of the race, with di Grassi just using his first attack mode to get round Paffett for P9. Vergne followed suit and it was status quo in that fight. At the front, though, Oliver Rowland felt no such compunctions and put a ruthless move on Vandoorne, taking P5 away from him.

Another fight was raging as well, as Evans was trying to get by Abt, who shut the door hard and then a lap later, snuck up the inside and put Vandoorne another spot down. Determined to stop the bleeding, he put a robust block on Evans, who tried his best to get round but was forced to concede to the unyielding logic of an approaching wall.

22 minutes to go and 15 laps in the books and Frijns was finally cutting seriously into Sims'lead. Into T1 they went and again Frijns went to the beach, chucking up clouds of sand as Sims tried too late to shut the door. Off he went in search of ultimate glory and he was rapidly a second ahead of the BMW Andretti driver. This left Bird tracking down Buemi, looking for a double podium to salvage a little pride for the Envision Virgin team which had started strong but had been plagued by ill luck and the odd rash decision.

The Lopez and Lotterer tango was officially announced as being investigated, but given they were both out of the race, not much in it. Evans was on a tear in the meantime, and with just under 14 minutes to go he took P6 away from Oliver Rowland, which put his 2nd place in the championship officially into jeapordy as just 3 points had separated di Grassi and Evans at the start of the race.

Responding, di Grassi used his fanboost to steal aplace from Vandoorne. Carrying on, he then did the same to Rowland, minus the fanboost and it was P7 for the Brasilian, with Vergne still in P10 and less than 10 minutes left to go. Realising that time was short, Vergne activated his attack mode and was off to have a go at Vandoorne. Buemi had a go at Sims and that caused him to get very out of shape, opening the door for Bird who pounced. Buemi was able to wrestle the car back from the brink and was able to defend, but the team were well pleased with the way things were going.

7 minutes to go, 28 laps in the books and Bird was told that Buemi was getting agitated on the radio while further back, Vergne had made his way past Bnadoorne and was in the process of lining up Rowland. Yellow flag for Gunther T6 was about to monkey wrench the field but he was able to clear the way before they got back round.

Evans on Abt was the fight on track with Abt defending ably but Evans not about to give him any quarter. Under 4 minutes to go and Massa had a lunge up the inside of the hairpin, on Turvey, resulting in the inevitable contact, of the non-race ending variety.

1 minute to go and Frijns began to ratchet it down in hopes of running one less lap. Vergne had decided to hold station behind Rowland, sensibly and as the clock ran to 0:00 the next lap was to be the last of the season. Frijns 4 seconds up the road easily sailed through the final lap and crossed the line while OOOOH, not to be outdone for spectacular sendoffs, di Grassi, trying to go up the inside of Evans, wound up locking wheels instead and the pair of them roasted the hoardings all the way down to the runoff for T11. di Grassi got the worst of it, with Evans able to cross the line in 14th while Lucas was stranded in the runoff, sealing the championship for both Vergne and Techeetah. 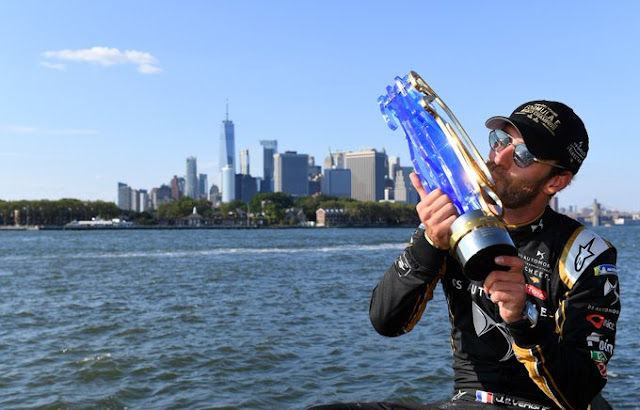 For Vergne it was back-to-back championships, and for Techeetah it was a redemption after last years bitter loss in the teams championship. On replay, the action between Evans and di Grassi looked clearer, with di Grassi, after tagging Evans on the way into the the hairpin, tried to sell a dummy on the outside with Evans already heading that direction. Evans cut back to the inside, but di Grassi had already cut back and was already there, and they touched wheels and it was all over.

Evans was dinged with a 10 second stop and go which was converted to a time penalty and he was dropped to P17, that being the end of that. But he paid a higher price in the championship, as with the win Frijns elevated himself to 4th overall by a single point, a result he'll likely not soon forget.

The other participant in that kefuffle, di Grassi also managed to cost himself a place in the championship, thought that would've been a done deal regardless as he would've needed to get by not only Evans, but Abt and Bird, highly unlikely on the final lap....

Quick shout to Gary Paffett finishing in the points after a season of remarkably bad luck and to Alexander Sims as well, his first podium in Formula E and well deserved after a strong season.

Perhaps the biggest winners on the day, though, were Envision Virgin whose haul of points, 37, in the final round was enough to move them past Nissan e.Dams and up into 3rd overall in the teams championship. Never dull, apparently, this little race in New York and with Porsche and Mercedes joining the championship next season, there will definitely be some fun to be had with the driver market over the summer but it's worth remembering that new teams, regardless of how well prepared they are, tend to take a season or so to really get their feet under them.

Editors notes - Lastly, a big thanks to Matt for providing his insight and coverage for the site this weekend
Tagged
Newer Post Older Post