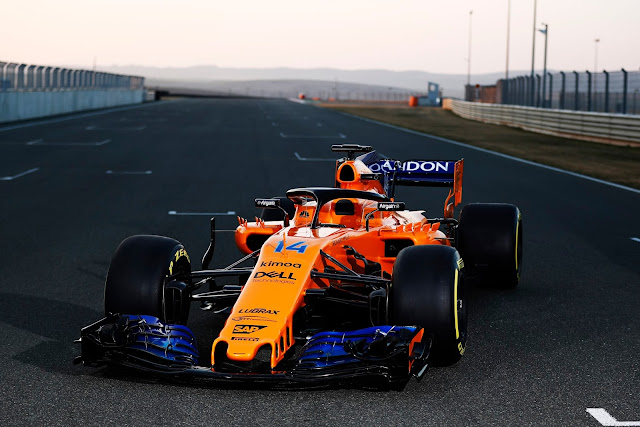 The McLaren MCL33 is a car very much in the embryonic stages of its development, with the team having switched powerunit supplier, from Honda to Renault this season.

It’s a change that warrants serious consideration, with the team forced to rethink their entire rear end installation, not only from a physical point of view but an aerodynamic one too. Looking at this launch version of the car you’d suggest that the team have been cautious in their approach to these challenges, especially in terms of cooling, meaning they'll have to lean on what even they’ve referred to on several occasions as one of the best chassis’ on the grid.

Undoubtedly the recent lineage of predecessors have been held back by the problems associated with the Honda powerunit, with the arrival of Peter Prodromou from Red Bull in 2014 as head of aerodynamics a catalyst for a change in philosophy at McLaren. Slowly but surely the McLaren’s since that date have converged on a similar high rake concept, with more than a hint of Red Bull about their aerodynamic surface choices too. In fact I’ve often thought that if I photoshopped both of their front wings white even their fans would struggle to tell the difference.

Having said that, whilst the pairs 2017 machinery bore the core philosophical principles, you can really start to see where the aerodynamic design teams led by Prodromou and Dan Fallows from McLaren and Red Bull respectively have encountered divergent evolution, with the DNA of each team infiltrating the design process in different ways. 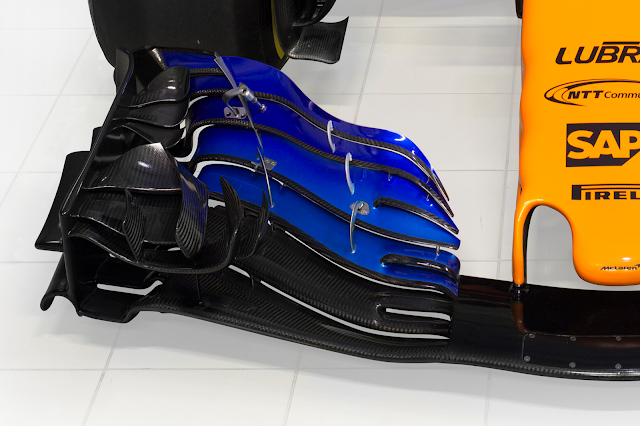 In the case of McLaren that has led to the the inboard section of their front wing being loaded with slots and edges, rotating the Y250 vortex that’s shed from the juncture between the neutral central section of the wing and the mainplane. The wing, which seems heavily developed, is actually a carry over from the end of last season and will undoubtedly, much like the rest of the car give them a good baseline with which to work outwards from at the start of the campaign. 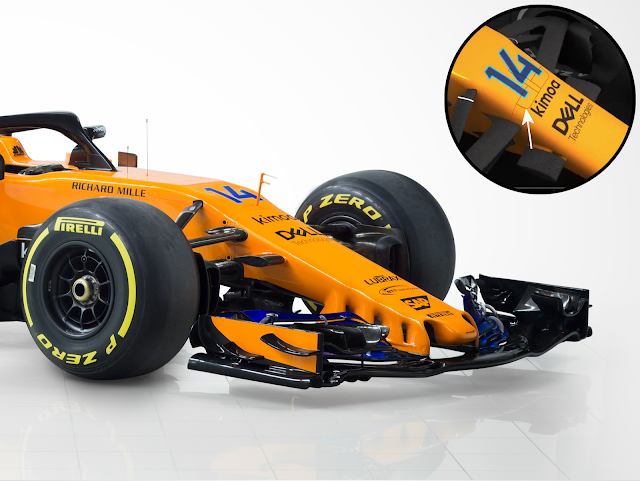 The launch car shows a nose design reminiscent of last years appendage, featuring elongated front wing pillars with three slots that not only help to control, shape and harness the Y250 vortex alongside but also pull airflow around the front wings neutral central section. The team have utilised an 'S' duct for a number of seasons now and it's not the first time that the launch car has been devoid of the device but MCL33 seems not to feature one, or doesn't it?

Having watched the teams 3D animation on Twitter it's clear to see the 'S' duct outlet panelling (inset) which suggests to me that we'll see it return, perhaps in a more aggressive format, during testing or as part of the large update package they've suggested will be available for the Australian GP. 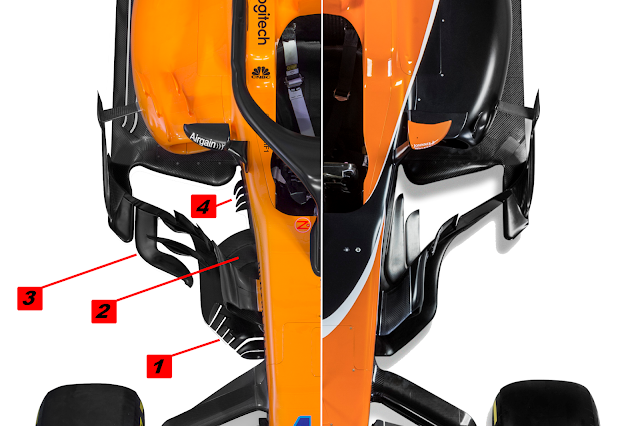 There has been some work done just ahead of the sidepod too, continuing the development done by the team in 2017, with the splitters extensions now heavily serrated [1], a revised floor section placed between the bargeboards and the leading edge of the floor [2], another small row of serrations behind this [4] and also a half crescent shaped pre-bargeboard swept across in front of the main bargeboard [3].

Given the importance of gathering data, racking up mileage and generally getting an understanding of the cars behaviour with another powerunit onboard it’s easy to see why the team have chosen not to take aggressive design measures this year, evolving what they already considered to be a machine with untapped potential instead. However, it’s far from an MCL32 dressed up in Renault clothing though, with the team having come up with several solutions that make it stand apart from last years car. 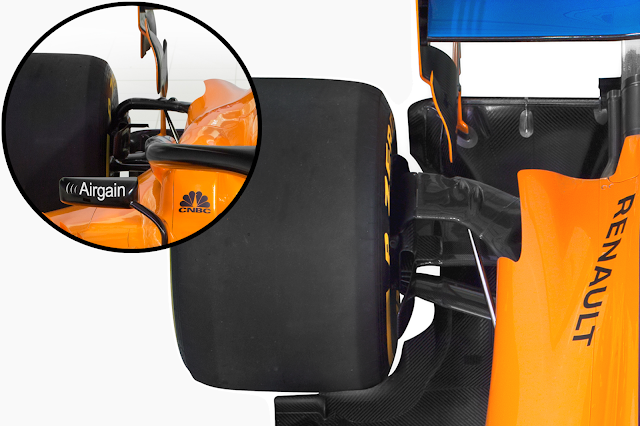 All of the teams had a certain level of tolerance built into their suspension systems in 2017, with loads up dramatically on the previous year given the additional width and weight of the new generation of tyres introduced by Pirelli. As such, they’ll have undoubtedly made weight saving in this regard as they remove some of the unnecessary bulk.  However, at the rear of the car McLaren are pioneering yet another fresh design, repositioning the inboard connecting points of the upper wishbone, whilst reshaping and conjoining it in order that it gives the most aerodynamically efficient shape possible. 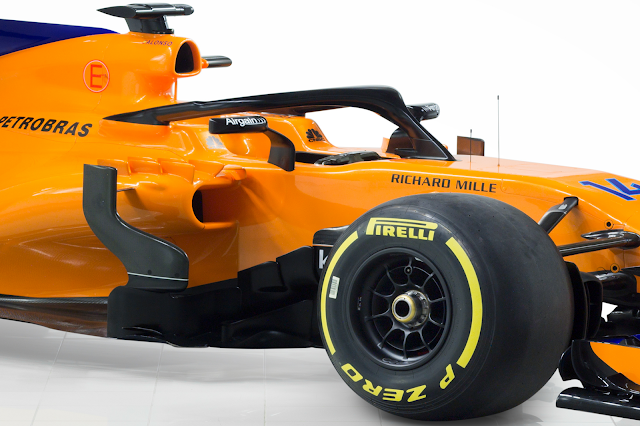 The sidepods, an area of attention for almost the entire grid as they converge on the ideas set forth by Ferrari in 2017, have been left virtually untouched by McLaren. A wide sweeping change in this area of the car was perhaps considered a bridge too far considering the upheaval already undertaken to install the new powerunit. The sidepods are already pretty much as narrow as is impossible with the higher mounted side impact spar, with an aggressive undercut carved out under the small inlet, tapering back along the car in a slightly revised geometry to accommodate the different powerunit ancillaries toward the coke bottle region. 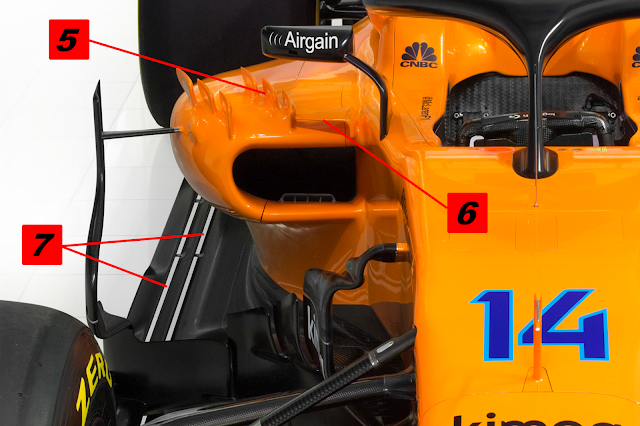 On top of the sidepod you’ll find an additional staggered row of vertical vortex generators [5], which run parallel with the outer ones already run during 2017. There's also a triangular shaped horizontal winglet mounted between the forwardmost of these new vortex generators and the cockpit [6], (it's not new but now finds itself attached to the new vortex generator) all of which help the airflow to follow the curvature of the sidepod. Flanking the sidepod you'll find two extremely long slots, spanning almost the entire length of the floor [7], a design that takes what was introduced by most of the field during 2017 and runs off into the distance with it. 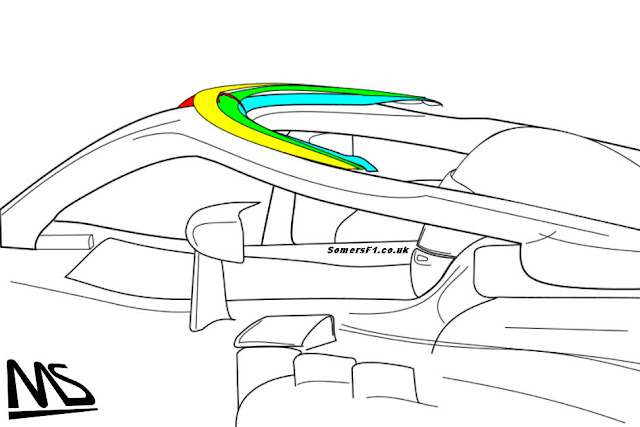 It's worth noting that the team have yet to run the type of halo fairing we saw from them in the post Abu Dhabi test too, with the team maximising the 20mm tolerance to create three hooped winglets that sat astride the safety structure. These are allowed by the FIA in order that teams can create aerodynamic structures that limit the safety structures influence on the airflow, with each team keen to attenuate its effect on the airbox, which can be damaging to powerunit performance, and the rear wing. 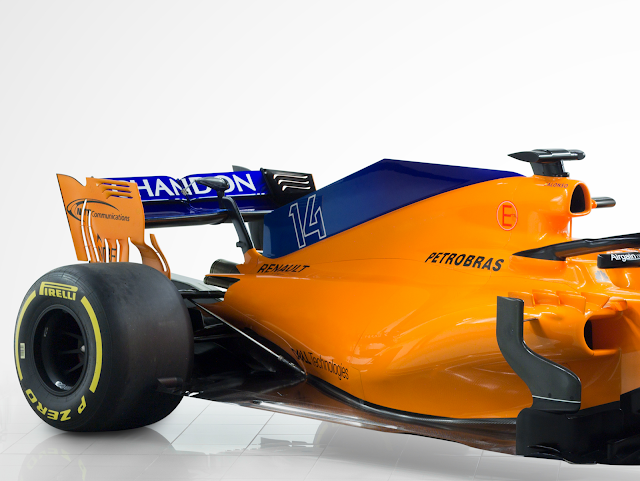 The rear of the car, complete with its new suspension and gearbox is elegantly packaged, much like you'd expect, with a more substantial single rear wing support pillar now mounted to the engine cover at its base, much like Red Bull did last year. It's unclear if the pillar also continues down and through the exhaust, as had become en vogue but appears to be a feature lost this season. (This is likely down to the changes surrounding the length of the exhaust and the placement of aerodynamic furniture around it. However, what does stand out is the upwards curvature of the tail pipe and crash structure, with the team seemingly looking to continue to leverage the aerodynamic advantages presented by connecting the diffuser and rear wings flow structures. 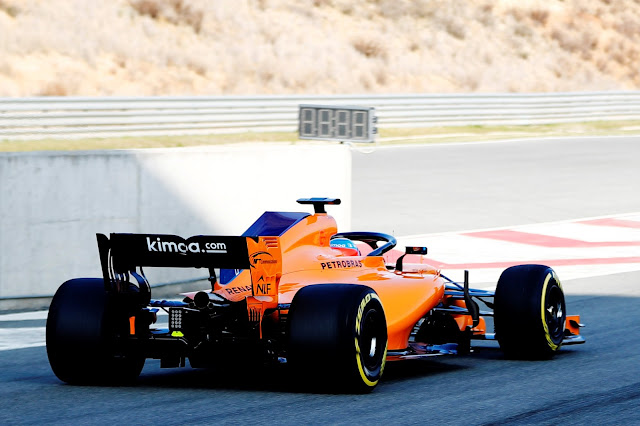 It's even more visible in this rearward shot of the MCL33 shared by the team, as you can imagine the upward trajectory of the exhaust plume. It's also worth noting the small notch on the rear wing pillar, which is likely going to house a stalk from which a stack of winglets will be mounted (much like the ones used in 2017, below).

As a point of interest the central section of the diffuser has also been modified for 2018, with an arched profile in use, rather than the squared version used in 2017 - likely the result of the aforementioned exhaust and crash structure changes. 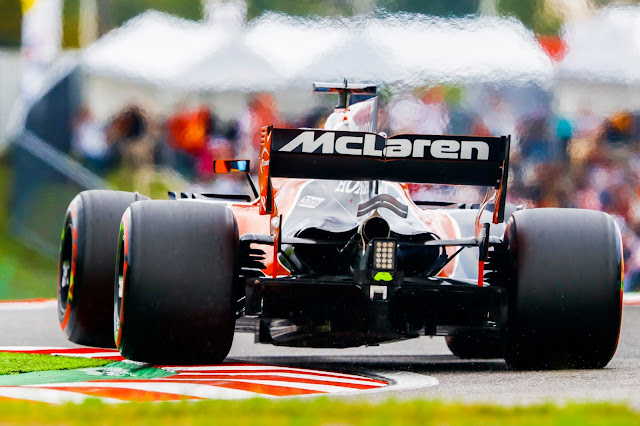 Overall the MCL33 is perhaps the least visually different car of the ones presented so far but, with all the architectural changes made beneath the skin to accommodate the Renault powerunit and what is considered to be one of the best chassis’ it’s of no real surprise.

Don't forget, if you like the content I create I'm trying to ramp things up for 2018 and will be providing full car illustrations for most of the field, I'll update these throughout the season to give a 'story mode' of their development throughout. You'll be able to follow this by contributing via my Patreon page - www.Patreon.com/SomersF1
Tagged
Newer Post Older Post