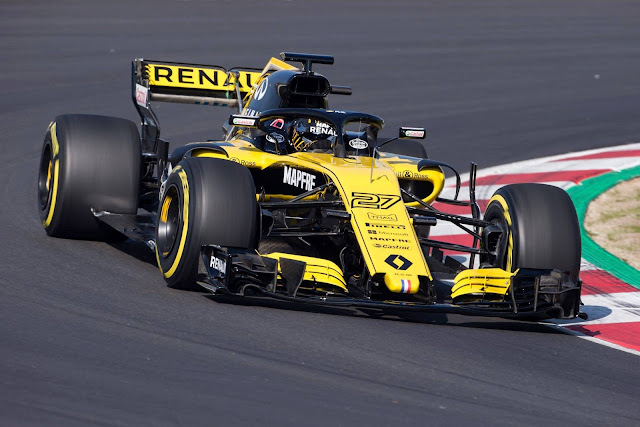 To say I was disappointed when I first saw the RS18 renders would be an understatement, as I’ve long held the view that 2018 could be their breakthrough year.

A huge investment in staff and infrastructure along with securing the ‘temporary’ transfer of Carlos Sainz Jnr from the Red Bull stable was enough to convince me they were on their way back to the head of the field.

The team conducted a filming day (read as shakedown) in Barcelona today and whilst the car still wasn’t fully prepared with all the bells and whistles we can expect to be bolted onto it during next weeks first test, it was at least a physical representation of their 2018 challenger. 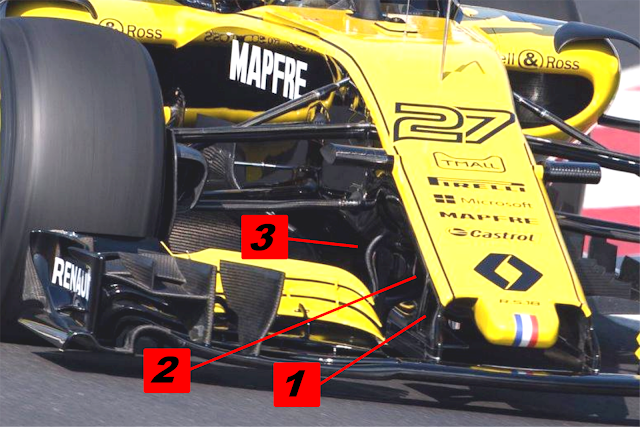 The first thing to note is that the team appear to have taken some inspiration from McLaren, with a hole present in both of the fluted front wing pillars [1], improving airflow around what are a long surfaces. Just in behind this would appear to be the ‘S’ duct inlet [2], mimicking where McLaren chose to have theirs last season. When we get to the turning vanes [3] it appears they may have switched playbooks as the bellmouth shape is distinctly similar to the ones seen on the Red Bull in recent years. 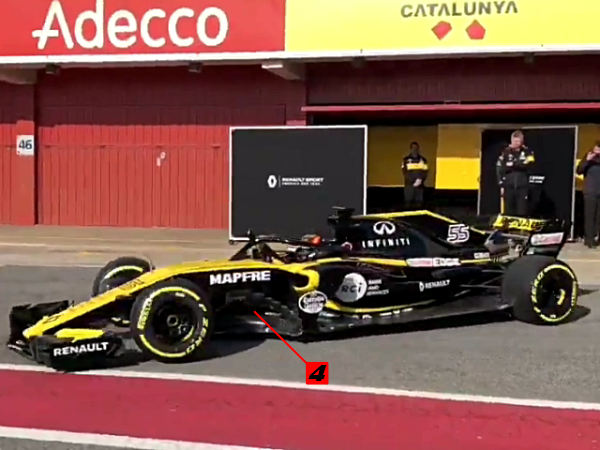 The bargeboards [4] used in this filming day (cough, shakedown) are also new and have a distinct feel of last years Force India about them, featuring a graduated drop away with numerous vertical serrations along that length. It’s difficult to make out in this grainy image (sorry I had to hack it out of a fairly low resolution video) but there also appears to be a smaller notched pre-bargeboard ahead too. 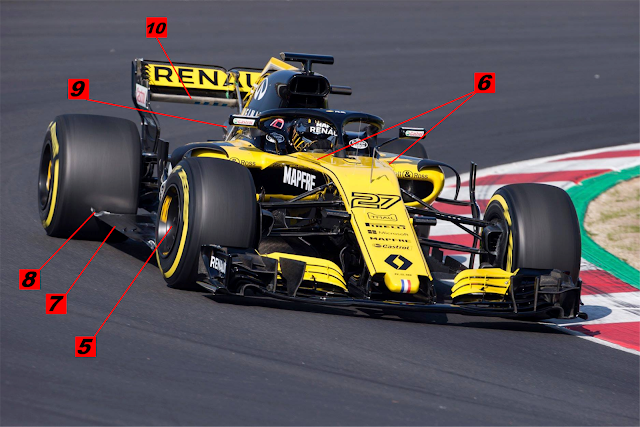 Having switched to a blown axle [5] during last years campaign it’s of no surprise that the new car does indeed feature one too, assisting the front wing in its duties of reigning in the wake created by the front tyre.

Atop the chassis we find what appear to be a couple of long wedge shaped winglets [6], as the team look to define how flow moves around this area of the chassis, which is understandable given its proximity to the halo, which will disrupt the airflow.

Talking of the tyre squirt deck it would also appear that the team have arched the outer profile of the floor ahead of the rear tyre [8], as they look to create a more intense vortex that’ll hit the face of the tyre and push flow around it.

At the rear of the car the team appear to have, like McLaren, upended the exhausts tailpipe [9], as they look to use the excitable energy of the exhaust plume to help drive the diffuser and rear wings aero. Interestingly it would appear that they’ve also double barreled the wastegate pipes and placed them under the main exhaust outlet, rather than beside it.

The testing work that can be conducted whilst undergoing one of these ‘filming days’ is very limited but it would appear that the team were eager to keep an eye on the interaction of the exhaust plume with the underside of the rear wing, with what appears to be a row of heat strips attached to a deliberately unpainted mainplane [10] (blue stickers).

Again, I still await to see the full force of Renault’s might when they start testing in Barcelona next week, however, the signals from today at least provide better news than the renders did earlier in the week.

Don't forget, if you like the content I create I'm trying to ramp things up for 2018 and will be providing full car illustrations for most of the field, I'll update these throughout the season to give a 'story mode' of their development throughout. You'll be able to follow this by contributing via my Patreon page - www.Patreon.com/SomersF1